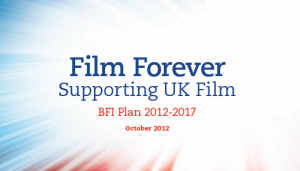 The BFI have just announced their 5 year plan roadshow, so I thought I would revisit the doc: BFI FilmForever and see what looks good. I reference some summaries by Screen and the guardian and select some highlight what appeals to film business research interests.

The aim is to launch a “BFI Player” by late 2013.We recognise that the most popular place for watching film is in the home with 80% of all film being viewed on television.We will develop a range of new services including BFI branded channels, VoD services and new apps for tablets, PCs and mobiles. These new services will provide access to the BFI’s rich content including the newly digitised 10,000 works

The BFI already has some content online with Distrify at their own BFI muvies channel, from which the films are socially shareable. If the BFI can leverage this as a platform for exploiting more recent, high profile works that have been shown on TV but are now library catalogue titles to their distributors, new marketing campaigns at the national level can stimulate legal digital consumption of film

The old P&A Fund has now been remodelled as “the Distribution Fund.” This will run on £4m a year and will have four categories of support including: “new models” for innovative distribution strategies” encouraging new thinking in distribution and marketing,including innovative release models that harness emerging digital platforms; and the creative and audience-building opportunities offered by cross-media activity

So its not the £5m Innovation fund that Pete Buckingham was going to have at UKFC but its great to see a roll back from the “nothing specifically digital” position taken by the BFI during their roadshow in May 2012. The importance of uncovering viable digital market devices is vital, as explored in Digital Disruption Cinema Moves Online. It is good news that an insightful cross-value-chain approach is taken that may lead to research developing shared and aligned values of digital engagement metrics as boundary objects between production, sales and distribution.

The joint venture initiative being explored by Matthew Justice and others at the recommendation of Lord Smith is extremely tricky. Melding the portfolio model of distributors that forms a key part of the industry’s structural-economic response to the Pareto dynamics of film returns, with early stage investment and engagement with producers in an ‘equitable’ manner is a tall task indeed. However, if this line of work, has embedded within it the experimentation in digital engagement models notes above, and feeds into evidence based policy commitments quoted below, then there is potential for advance. The FVC is proving untenable as a structural and therefore theoretical model, reconfigurations of the old model are not the answer to lost revenues of digital disruption, innovative inputs are required and the BFI is in a unique position as the master of all this data.

Also in the production sector the potential for a version of iFeatures with Creative Scotland is mooted in the plan. Having done a limited amount of work on the Film London microwave and seeing the distribution and career progression successes such as Shifty  and iLL Manors i think a roll out of a model with a specific purpose and known output would be very valuable. Especially when considering the BFIs other commitments:

……the potential for linking award winning and innovative film hubs like the Glasgow Film Theatre and Filmhouse Edinburgh that already have significant UK film festivals to a production scheme that would provide an identified meritocratic industry entry point for any potential film school graduates.

The BFI is creating a one-off £5m “capital fund” specifically for film schools; – with the union of Edinburgh University, Edinburgh College of Art and the in house existence of the Scottish Documentary Institute, which already delivers Oscar contending short films perhaps the potential for a film school in Edinburgh linked to the EIFF is a possibility. The top graduates might then be selected for the Scottish Shorts program and then an iFeatures housed at Film City Glasgow with GFT and associated businesses contributing to distribution / exhibition infrastructure as part of the audience development hubs network, the sucessor to the Cross Art Form Venues Network

Research £1m: A priority of the research will be systematic policy and programme evaluation to assist decision making by Government, BFI and other stakeholders Research-led knowledge will be integral to the support of digital innovation and other initiatives to help future-proof film

A true commitment in this area would be a substantial both to researchers in the field and the industry at large, the UKFC Research and Statistic Dept did great work and evidence led policy is something most public film/arts body pay namecheck but do not follow through on. There is a significant amount of work that institutions like the ICC and Cass could contribute to.

“It is up to us to have instincts about what we think is going to strike a chord with its audience.”

Aims: a positive trend in the following: The total size of UK audiences, measured by the number of views of feature films across all platforms in the UK; The market share of British independent films; The value of inward investment and of exports; The UK film industry contribution to GDP; Major domestic and international awards won by British films and UK talent; The diversity of UK audiences and the UK film workforce, in terms of ethnicity, gender, geography and disability; The % of the UK population that values film as part of their cultural life. For the BFI, we aim by 2017 to have:  Increased the size, diversity and geographic spread of audiences viewing British independent and specialised film

This section of the plan is really encouraging in terms of the indication it gives proposing responsibility and accountability for public investment; the need for professional data collection, collation and analysis.