Proof of demand, management of uncertainty, dealing with risk – however the core concern of the film business is labelled, the release of Terry Gilliam’s latest film: The Zero Theorem provides a rich insight into the tensions still at play in the Film Value Chain.

Through a number of public Facebook posts the director evidences several key themes of the movie industry that impact even those at the highest level of operation.

There is a scarcity of data for filmmakers to work with, even those with significant personal fanbases that can be leveraged to sell tickets appear to struggle in obtaining information from distributors. As you can see below the scale, strategy and terms of release are considered privileged information. 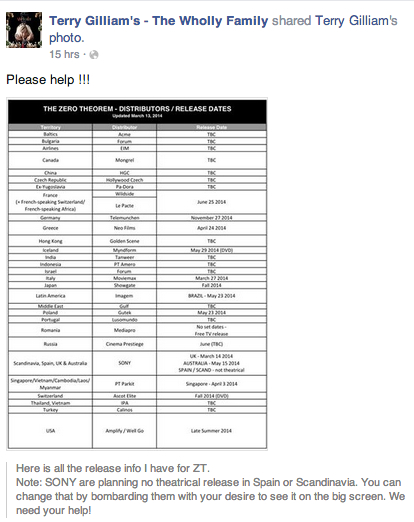 Despite seemingly pursuing a common agenda, the production company (director) is forced to leverage his social network to obtain release information and drive a demonstration of consumer demand.

This  breakdown in business communication has its roots in the cost/benefit analyses performed by distributors during release who must manage expected sales versus continued costs of P&A. By motivating social networks the director hopes to demonstrate proof of demand – the longer a film can be held over there are many further revenue multiples to be enjoyed – in Home Entertainment windows as well as from theatrical.

Although the facts in this case are unknown, it may be that the distributor has avoided discussions of release plans so as not to be confronted with its failure to meet expectations or promised results.

What is clear is that digitally enabled technology can potentially remedy some of the problems caused for distributors and thus TG, through on demand programming: 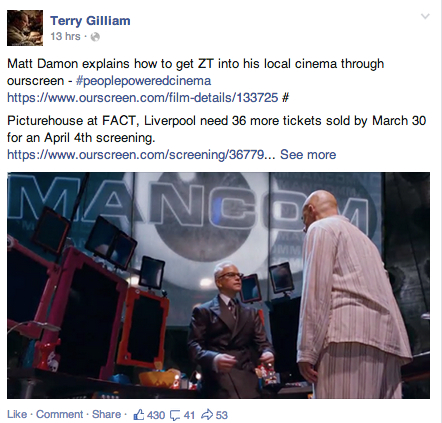 The power of data management – the market constructive role of Digital Engagement Metrics and the networks from which they are composed is clearly important in this new hybridised model of distribution.

Whilst this pre-sale model is unlikely to be a viable proposition for the whole of a film’s release, or most films, it is likely to become more widely adopted and become integrated with VOD strategies.

A means of communication between market actors in order to coordinate this type of activity – its planning and execution is definitely needed. As reasonably soon financiers and sales agents will need to make predictions of value based on such models being applied.